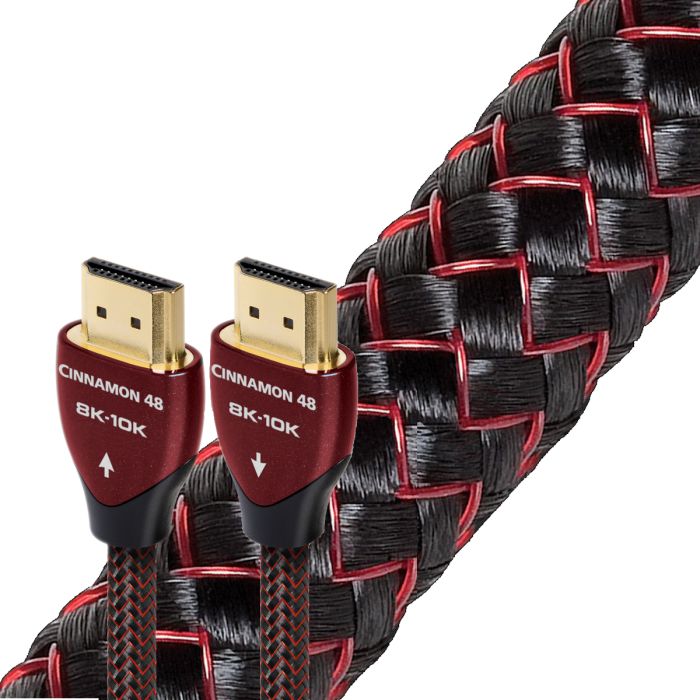 AudioQuest's Cinnamon 48 features 1.25% Silver-Plated Copper conductors that have been direction-controlled for the most efficient dissipation of radio-frequency noise; a metal-layer shield is placed around the 4 FRL + eARC pairs to further enhance noise-dissipation. While 8K and other compelling video/gaming features make the HDMI headlines, AudioQuest’s Cinnamon 48 Series HDMI cables are their best-sounding HDMI cables yet.

The greater precision and tighter manufacturing tolerances required to deliver Cinnamon 48 HDMI cables that transfer up to 48Gbps bandwidth mean all of AudioQuest’s tried-and-true ingredients and techniques matter every bit as much as ever before.

AudioQuest's Cinnamon 48 HDMI cables can transfer up to professional 10K Ultra-HD video. The 48Gbps bandwidth is made possible by 4 balanced audio/video pairs capable of 12Gbps each. The precision and tighter manufacturing tolerances required to produce HDMI cables that transfer up to 48Gbps bandwidth mean many of AudioQuest’s tried-and-true ingredients and techniques are more important than ever before.

In AudioQuest's Cinnamon 48 HDMI cables, increasingly thick layers of silver plating are applied to AudioQuest’s Long-Grain Copper (LGC) conductors to improve Noise-Dissipation. Placing the superior metal on the outside of the conductor produces the greatest benefit on overall performance—a superbly cost-effective way to maximize a digital cable. Cinnamon 48 uses 1.25% Silver-Plated Copper for its conductors.

Traditional “100% shielding” is not enough to guard against the increasingly prevalent effects of Wi-Fi, cellular, and satellite radiation. In AudioQuest HDMI cables, all 19 conductors are Direction-Controlled to minimize the RF Noise that damages performance by “directing” or draining it away from the most vulnerable circuits. Level 3 Noise Dissipation adds a high-loss carbon layer sandwiched between layers of metal around the 4 FRL + eARC pairs to further enhance noise-dissipation. Additional Noise-Dissipation techniques (Levels 4 and up) are applied to further reduce noise.