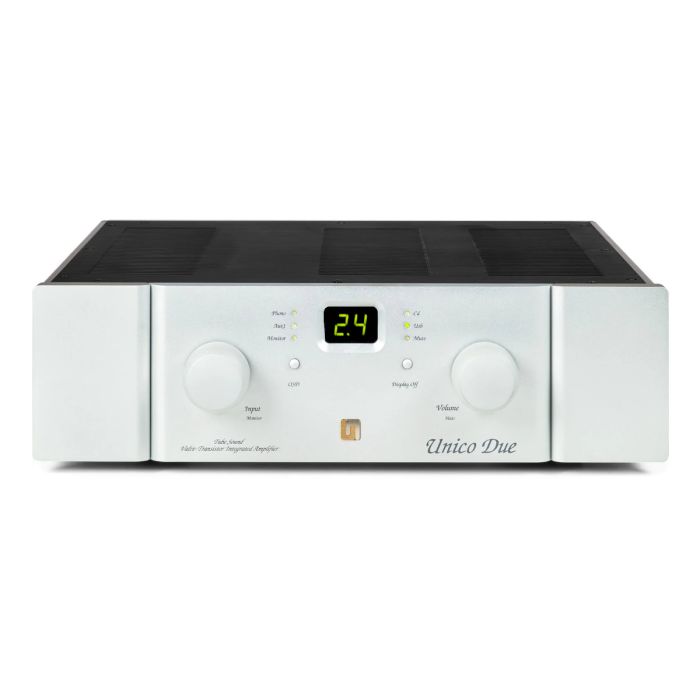 Unico Due is the latest amplifier from Unison Research. Unico Due benefits from Unison Research’s decades of experience in design and production technology. It maintains all the best qualities that made its predecessor a runaway success and introduces new and enhanced features.

The electronic circuitry of the Unico Due has been completely redesigned. While maintaining the qualities that made the Unico range such a legend in the audio industry, key improvements have been made that are nothing short of ground-breaking. Firstly, the power supply circuits have been enhanced thanks to a substantial increase in filter capacitance size and to a new high quality shielded and encapsulated power transformer. The new power distribution system of the audio power output stage combines space optimization, superior circuit solutions and improved assembly and service solutions. The heart of the preamplifier stage in based around two ECC83 double triodes (one per channel), configured as a gain stage followed by a cathode-follower. This circuit’s low output impedance efficiently drives the power stage that follows. The final choice of the 1 25 May 2018 type of valve and the circuitry used was made following extensive listening tests, after Unison experimented many equally high performance valve-based solutions and configurations in the test laboratory.

The Unico Due offers four inputs: three analogue inputs and one USB digital input. The input selection uses sealed miniature relay switches to preserve the delicate low-level signals, whereas the volume regulation is based on an integrated high-precision, high performance resistor array followed by a set of digitally controllable analogue switches, used in reference products and capable of 120 dB of attenuation with 0.5dB steps.

The power output stages are solid state and use a completely original combination of bipolar and MOSFET transistors. Furthermore, instead of designing in standard differential input stages, a sophisticated symmetrical BJT circuit is used that has moderate gain and very high intrinsic linearity, with separate feedback loops for AC and DC signals.

Thanks to its low distortion, Unison was able to configure it to have a very mild feedback level. The power output stages of the Unico Due feature a non-switching bias control circuit which prevents the current in the output transistors to reach zero. This greatly reduces distortion at low and very low listening levels and guarantees the highest sound transparency in any condition. The power output devices are connected in a “super symmetrical” configuration, i.e. negative and positive signal polarities are handled separately by a combination of N and P type devices.

You may ask yourself why Unison should worry about minimizing the distortion of the solid state power output stages when there is a valve pre-amplifier section that will add a small amount of distortion. The reason is very simple: our goal was to create an integrated amplifier whose “sonic character” was mainly dominated by the valve section, but with enough power to comfortably drive any loudspeaker system.

To improve performance further, Unison added regulated power supplies not only when it was absolutely necessary, but also in any part of the circuit where this would bring sonic improvements over using simple filtering. In the Unico Due there are no less than ten stabilized power supplies with output voltages ranging from 15V for low signal operational amplifiers to the 300V required by the valves in the preamplifier stage. Particular attention was paid to the output power stage supply. Considering the high value, impulsive, almost intractable nature of the current that the power stage has to handle, Unison decided to adopt a bold solution. Unison used large-value, high-quality capacitor banks, some of which are placed close to the power transistors to minimize the path to the current pulses. The supply tracks on the PCB are generously sized, having a thickness of 105um (3oz), and the ground return tracks have been designed with extreme care. Obviously difficult choices like these can create a number of design and realization difficulties which many engineers may decide to give up on and find easier solutions, but the engineers at Unison Research embraced these challenges and solved them without compromising on quality and performance. The final result is a design where almost 25% of the entire surface of all the PCBs in the Unico Due is dedicated to supplying power to the output devices!

The same meticulous attention was paid to managing the low-level audio signal. Starting with the gold-plated input connectors, to the speaker sockets that are also gold-plated, robust, versatile and completely insulated according to the latest regulations. Furthermore, the audio signal is fed through circuitry using the highest available quality of components: high-precision sealed micro-relay switches, carefully selected Mundorf capacitors, low tolerance metal film resistors, ceramic tube sockets with gold contacts, and much more.

You can select the input source by rotating the “selector” knob or pressing the dedicated buttons on the remote handset. The selection sequence is circular; the currently selected input is indicated by the front panel LEDs.

The volume setting can be varied by rotating the “volume” knob or pressing the dedicated buttons on the remote handset; the level is indicated by the front panel display which shows a number between 0.0 (min level) and 9.9 (max level).

Switching to tape/monitor mode makes another line-level input available (see Notes about inputs); you can activate it with a short press on the selector knob. Another short press switches it back to the selected input

The mute function immediately applies the maximum attenuation to the currently selected input. You can activate it by a short press on the volume knob; the level shown on the display doesn’t change but the mute status is indicated by the status LEDs. Another short press disengages mute.

The OSD function puts only the output power stages in stand-by mode. When switched back, the devices starts without requiring warm up. The DAC line output remains active.

When the display is set to off, the display turns off after 20 seconds of inactivity and turns on automatically when any single function is activated.

The AV function allows you to connect Unico Due to an AV playback system and you can choose the AV input and pre-set the volume level. Once set, pressing the "Push" button on the Unico Due handset will switch to the AV input selected and adjust the volume to the previously pre-set level.

Select the desired channel and volume using the input and volume selector knobs. Hold down the selector switch on the monitor, press the OSD button until the display flashes, then release the button. Pressing the "push" button on the Unico Due remote control will automatically switch to the selected channel on the selected volume.

• Put Unico Due into mute with a short press of the volume knob;
• Hold down the input selector knob to activate the monitor function, then press the OSD button until the display blinks;
• Release the button; after this, pressing the “Push” button on the handset will not do anything.

Unico Due is equipped with a sophisticated microprocessor-controlled system that monitors its power output. In case the power output is high over an excessively long time, Unico Due gradually decreases the volume level to a more sustainable level to protect the power devices.

The Unico Due aims to satisfy even the most demanding users and offers the following features:

Resolution up to 32 bits