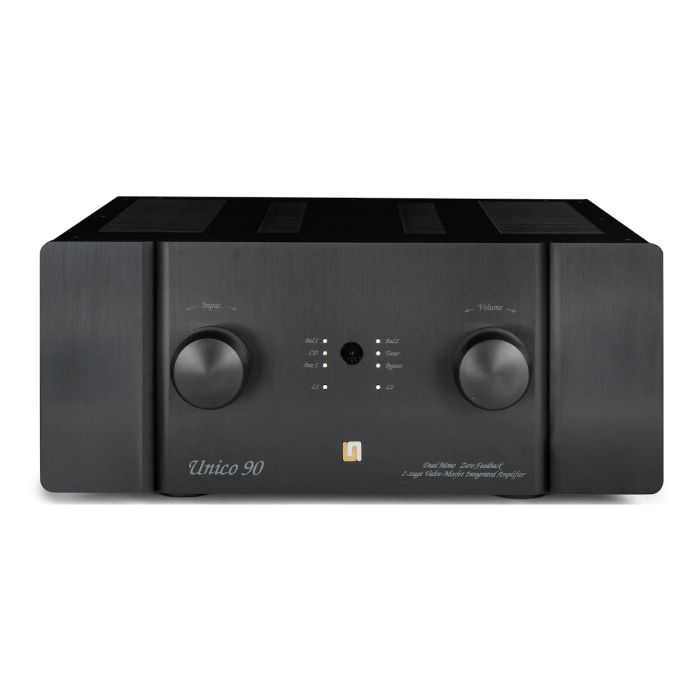 The Unico 90 is a hybrid integrated amplifier developed according to specific sonic and scientific criteria set by the design team at Unison Research. These criteria led to a product completely different from anything else Unison Research has ever released. That means it’s also different from every other amplifier, valve or solid state, on the market.

Unison Research led to two circuit performance standards that are, to us, considered essential for excellent performance: a 3-stage circuit and a 2-stage circuit, both with zero global feedback. The first type is used in the new Unico 150, and is more suitable for integrated amplifiers with higher-than average power. The second type, used in the Unico 90, is a more effective application for medium-powered amplifiers.

Both of these approaches allow Unison Research to reach a standard of linearity that is almost impossible with the usual technologies that are matched to single-ended driving capabilities. In fact, the linearity of these new designs is downright remarkable and typical of the best solid state amplification available.

The heart of the Unico 90 circuit is found in its hybrid structure. All of the gain, and subsequently the "character" of the amp, is determined by the only tube stage made with ECC83 and ECC 81in particular multiple-parallel-totempole. This stage is made with the six triodes for channel, and is configured so that they present limited gain with the least output impedance possible. The choice of the triode was determined by multiple factors during the development process although the testing and research made the ultimate choices rather obvious. These factors included the following:

Transistors (bipolar or field effect that they are) and valves distort. But in terms of high order residues, valves are unsurpassed and allow invariant residues across almost the entire range of frequencies audible to the human ear. Many audiophiles speak of valves having a soft sound, and this feature is immediately identifiable on an oscilloscope. In fact, you can see on display the waveform of residual distortion of a valve circuit that the signal never changes that quickly, especially compared to the norm of almost all transistor circuits. When those valve circuits are in parallel, however, the measurement of distortion within the frequency of the input signal trend nearly flat.

When designing the Unison Research Unico 90, consistency was one of the primary goals. This consistency is maintained practically at almost every level of power delivery, with the partial exception of the eighth highest at maximum power (a condition that no actual audio signal may take). This is due to the linearity the first two stages of valves, and direct coupling between these and the MOSFET output. This innovative solution has allowed Unison Research to eliminate yet another stage present in virtually every other amplifier, thermal compensation, which in certain cases can be a direct or indirect source of distortion. The Unico 90 reaches nominal linearity in just a few tenths of a second, with optimal linearity optimal achieved in little more than 10 minutes.

The preamp section of the Unico 90 also incorporates a number of innovative solutions. The preamp section is totally passive. Doing otherwise, of course, would have increased the number of stages in the circuit. An ALPS potentiometer is armored in four sections, parallel in pairs, so as to reduce the already minimal noise in order to further improve the precision of the channel balance, especially in the region of high attenuation. The selected sources are connected one at a time, lifting the mass from those not connected in order to interrupt the ground loops associated to the connections not used. (These could otherwise act as an antenna and reveal the electromagnetic signals present in the environment, in addition to generating crosstalk between the channels.) Switching is performed by purely mechanical miniature relays that are armored and placed behind the sockets. The terminals of the input not used are deflected toward their ground through resistors of suitable value to preserve integrity in order to eliminate the risk of capacitive coupling through the movable contacts. The balanced inputs are not obtained by electrical means, which would be considered a “fall back” solution, given the impossibility of obtaining symmetry on the terminals of opposite polarities. Instead, Unison used transformers which allow a truly balanced transmission of signals and galvanic isolation. In addition, this approach creates powerful aid against the ability to break down interference coming from anywhere else. Although optimized for this function, the use of these transformers may offer slightly worsen electrical performance at lower frequencies, particularly with sources where the output impedance is not low. All listening tests conducted in the course of development, however, have confirmed the effectiveness of this choice, which was therefore maintained despite the significant increase in cost.

The Unico 90 is a dual mono amplifier with a single power transformer capable of delivering 600 continuously. The power MOSFET of each channel can handle power up to 900 watts and stationary currents up to + -40 amperes. These circuits, of course, are protected and are weighted on 70% of their maximum specifications so to maintain an adequate margin of safety without affecting significant drive capabilities. The total transparency of the sound of these circuits is easily verifiable--they protect in real-time and can disconnect the load when activated by the intervention of a single half-wave signal.

Unico 90 can drive loudspeakers that are very challenging loads, but it is advisable not to choose extreme speakers with a minimum impedance of less than 2 ohms. Its design is based on a balance of features, and altering it would involve sacrifices in certain directions. Increasing the number of MOSFETs, for example, would permit the use of loudspeakers with impedances of less than 2 ohms without altering the production cost significantly, but this would compromise that consistency and linearity across the high frequencies. could have extended the frequencies a few tenths of a Hz, and it would have been very easy to do so, but it would have increased the overdriving of the inputs resulting in badly-digested tube power due to the potential positive effects of the grid.

All capacitors "touched" by the signal are the types that exhibit very low loss and excellent behavior at high frequencies. The polypropylene capacitors in particular, have been widely used for supporting the speed and acceleration of the signal. Three Mundorf capacitors with very low stray inductance are used in each channel to provide a final energy reserve, small but nearly instantaneous, and used in parallel they reduce the effect of parasitic inductance of the slopes connecting to the main large electrolytic tank. As usual for Unison Research, these electrolytic caps are constructed from Italian Itelcond and have a low stray inductance, and are doubled on each branch to lower the inductance further

Unsion Research has accounted for every detail, and thousands of simulations have been carried out in our research labs to arrive at the Unico 90 integrated amplifier. We have built dozens of prototypes to test every conceivable variation until we have realized our goals through extensive listening tests.

The Unico 90 is an amplifier where the measurements are the electrical function of the desired sound—not the other way around.

Number of stage:
2, This amplifier due to the particular circuitry is realized by only two stages: input stage and output stage, and use only local feedback