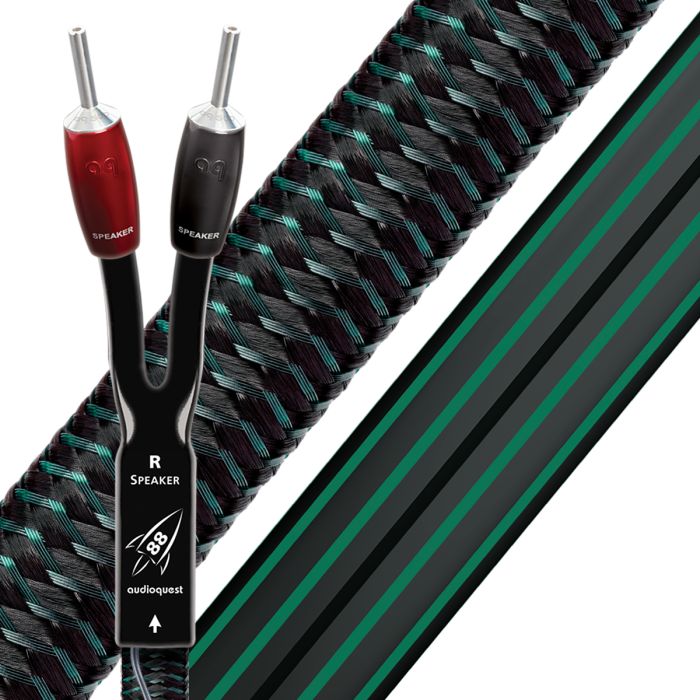 The Rocket 88 speaker cable incorporates AudioQuest's patented Dielectric-Bias System (DBS) and replaces Long-Grain Copper with solid Perfect-Surface Copper+. DBS offers a lower noise-floor, so you can hear deeper into the nuances of your favorite music. At the same time the addition of more PSC+ offers a smoother, more relaxed, and natural sonic timbre and texture.

The Rocket 88's negative conductors are covered with partially conductive Carbon-Loaded Polyethylene. This remarkable material reduces radio-frequency garbage being fed back into the amplifier. The sonic benefit is exactly the same reduction in "hash" and improved dimensionality that comes whenever RF interference is reduced in an audio circuit. In addition, a carbon layer damps interaction between positive and negative conductors, and an external Carbon-Based Noise-Dissipation System reduces external interference.

The Rocket 88 is prepared with 500 Series Multi-Spade or Banana (Gold or Silver) Connectors. These connectors feature Direct-Silver over copper with no layer of nickel in between.

"The Rocket 88 provided the most dramatic improvement to the sound across the board. The Rocket 88 had the best bass and the most presence. Treble improvements were as good or better than the Cinnamon with both JitterBugs."