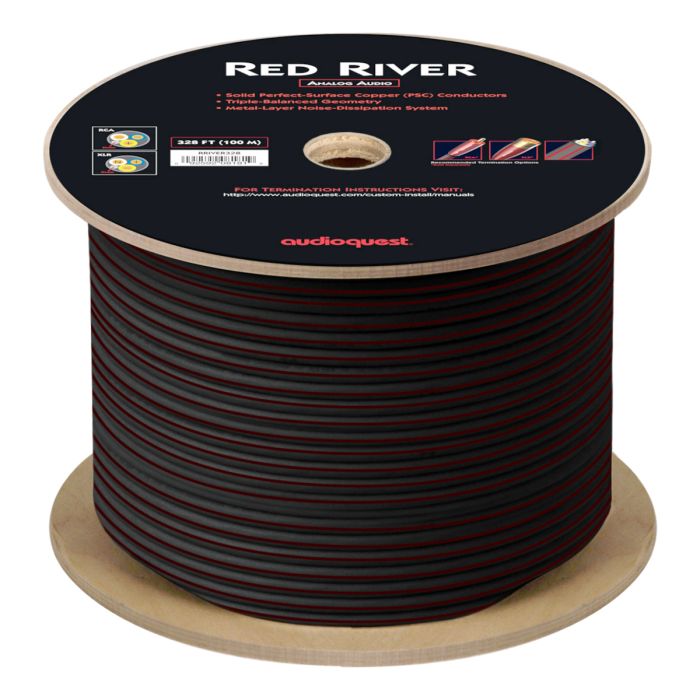 AudioQuest's Triple-Balanced Geometry uses a separate ground-reference conductor, so the cable's shield is never used as an inferior conductor. Whether prepared with RCA or XLR plugs, the cable's three conductors ensure that the positive and negative signals have equally superior, low-distortion conducting paths.

AudioQuest's Red River Bulk cable is suitable for RCA or XLR applications using the applicable terminations. Please see the Termination Manual for more information. AudioQuest recommends the use of their proprietary connectors and termination tool for best results.

It's easy to accomplish 100% shield coverage. Preventing captured radio-frequency interference (RFI) from modulating the equipment's ground reference requires AudioQuest's Noise-Dissipation. Traditional shield systems typically absorb and then drain noise/RF energy to component ground, modulating and distorting the critical "reference" ground plane, which in turn causes a distortion of the signal. Noise-Dissipation "shields the shield," absorbing and reflecting most of this noise/RF energy before it reaches the layer attached to ground.

Hard-Cell Foam (HCF) Insulation ensures critical signal-pair geometry. Any solid material adjacent to a conductor is actually part of an imperfect circuit. Wire insulation and circuit board materials all absorb energy. Some of this energy is stored and then released as distortion. Hard-Cell Foam Insulation is similar to the Foamed-PE used in our more affordable Bridges & Falls cables, and is nitrogen-injected to create air pockets. Because nitrogen does not absorb energy and therefore does not release any energy from or into the conductor, distortion is reduced. In addition, the stiffness of the material allows the cable's conductors to maintain a stable relationship along the cable's full length, producing a stable impedance character and further minimizing distortion.